THE PROFESSES CAROLINA ZELINSKA-DABKOWSKA, MEMBER OF IALD, IES, RIBA, CIE, TELLS FOR ARC MAGAZINE WHAT IS A BIOPHILIC DESIGN AND THE POSSIBILITIES OF LIGHTING IN THE CURRENT TREND
Поделиться новостью
All News

During the 20th century, many people migrated to cities for employment and economic opportunities, abandoning farming and natural landscapes so their direct connection to the countryside and nature was lost. This process continues to this day with unprecedented urban growth, in fact, it’s estimated 68% of the world population will live in urban areas by 2050. Due to the evolutionary disposition of humans, when people live in an urban habitat, they will still seek to restore their lost relationship with plants and the natural world.

In 1994, Edward O. Wilson introduced the term Biophilia for the first time, which describes the deep affiliation humans have with other life forms and nature as a whole: a connection rooted in human biology. Later, at the turn of the 21st century, this knowledge began to be applied, and a noticeable global trend developed in the application of biophilic design principles in the projects of numerous, internationally recognized architectural practices. This included WOHA, Foster and Partners, UNStudio, BIG Architects and MVRDV to name a few. Asia and especially Singapore are still at the forefront of this new development. 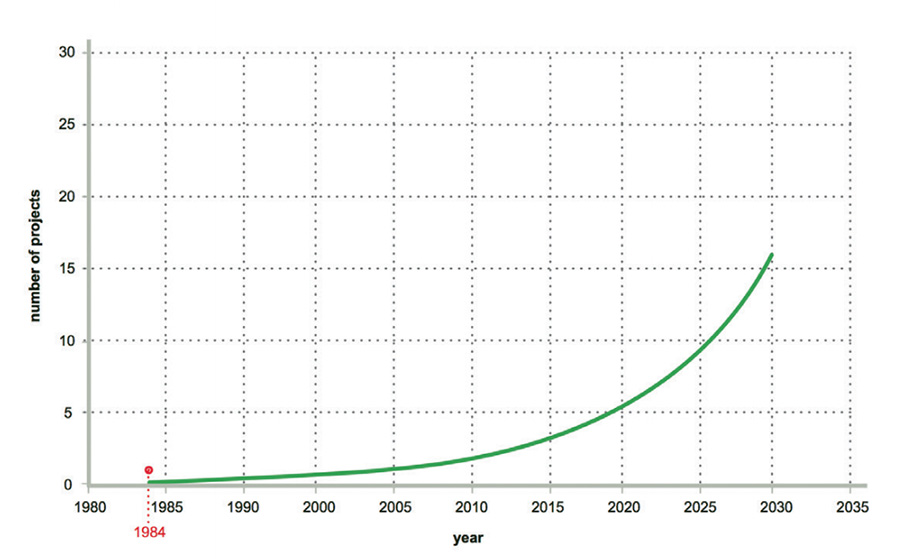 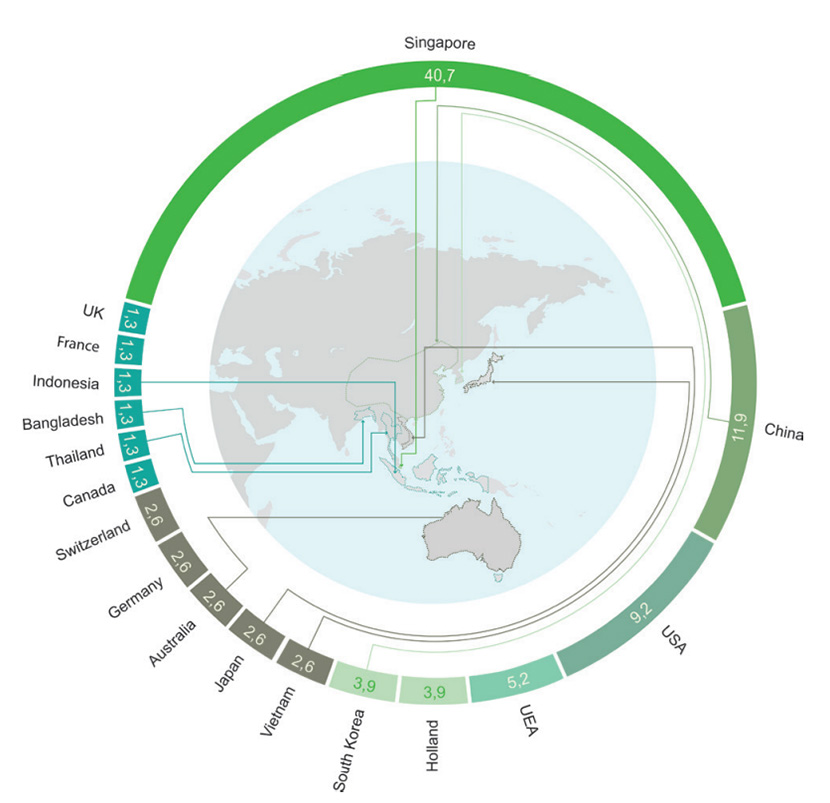 It has recently been acknowledged that a crucial factor of biophilia has been overlooked in the development of the 1990s green building rating and certification systems. Such schemes are voluntary and usually involve third party-assessed rating systems that relate to the built environment with the purpose of mitigating the impact of a building on the natural environment.This is most often achieved via the integration of sustainable design, adopted by companies to demonstrate the integrity, responsibility and awareness of their organisations. The human need to connect with nature and the relationship that exists with the man-made environment goes beyond the fundamentals of low impact design with raw materials, energy efficiency, safety or pollution. Rather, it deals with the effects on the physical and mental health and wellbeing of a building’s occupants. Biophilic design applies especially to office buildings. In Europe alone, millions of people spend more than 90 percent of their day in enclosed spaces and they typically work a five-day, 40-hour week. Therefore, it’s of utmost importance to create harmonious and sustainable interior spaces that support human biology and respect plant life. According to research, biophilic design creates healthier spaces that support wellbeing, boost creativity and focus, increase productivity, and reduce staff absence. Another factor that plays an important role in the provision of green areas and plants into the built environment is to provide cleaner air to reduce the problem of indoor air pollution.

So, to bridge this gap, the introduction of biophilic design into the verification process of building design as a practical and creative solution will help to re-establish conviviality with nature in the built environment. There are three green building rating and certificationsystems that set benchmarks for health-centered practice that incorporate biophilic design principles: (1) the international BRE Global’s Building Research Establishment Environmental Assessment Method (BREEAM), (2) the U.S. Green Building Council’s Leadership in Energy and Environmental Design (LEED) programme, and (3) the International WELL Building Institute’s WELL Building Standard – the first performance-based building standard and certification programme to focus exclusively on the health and wellness of the people in buildings.

In the BREEAM UK New Construction 2018 Land Use and Ecology (LE 04 Change and enhancement of ecological value category https://bit.ly/2Wkpv4Y), credits can be achieved by improving the health, wellbeing and potentially, the productivity of occupants, users and neighbors through the provision of recreational space and an increased connection between people and the natural environment (biophilia).

The intention of LEED v.4 for the New Constructions Credit called Designing with Nature, Biophilic Design for the Indoor Environment is to support and improve human health, wellbeing, and productivity by providing and incorporating elements of nature in the indoor environment (https://bit.ly/2WgirGJ). A biophilic design plan incorporates at least five distinct design criteria related to biophilic design which must be developed and implemented. This includes: providing regular access to nature in the space, offering natural analogues, ensuring spatial properties align with the nature of the space, uniquely connecting people to the place, climate, and culture, and lastly, creating sufficient opportunities for human nature interactions within the building and within the project boundary, external to the building.

In the WELL v2 pilot (https://bit.ly/2wzi7U8), the new version of WELL Building Standard, one can achieve credit points in Feature 89 Biophilia I – Qualitative by presenting a biophilia plan that includes a description of how the project incorporates nature through the environmental elements, lighting and space layout (https://bit.ly/2Ijsdhk). Additionally, two requirements in Feature 100 Biophilia II – Quantitative for Indoor Biophilia have been established: potted plants or planted beds should cover at least one percent of floor area per floor and/or a plant wall per floor, covering a wall area equal to or greater than two percent of the floor area, or covering the largest of the available walls, whichever is greater (https://bit.ly/2EOw4SK). Achieved BREEAM credits and criteria may contribute to claiming WELL certification. Although biophilic design goals might sometimes conflict with the most energy-efficient design requirements, a fully sustainable building must meet the needs of its occupants.

Biophilic Design and Lighting – A Field In Flux

With recently published reports such as HUMAN SPACES: The Global Impact of Biophilic Design in the Workplace, books (https://bit.ly/2wtT4lx, https://bit.ly/2WFM1F4), past and upcoming conferences and seminars (https://bit.ly/2HOvC8N, https://bit.ly/2VRjpEw) clients and architects expect their projects will incorporate theses new elements. Interestingly, when consulting lighting manufacturers or plant specialists on how to illuminate ornamental plants for real life projects with LEDs, often answers aren’t available because there are no worldwide established standards and recommendations regarding how to correctly illuminate them. Furthermore, if there is no daylight available in built environments, many plants do not survive so they need to be constantly replaced due to insufficiently designed and specified artificial lighting.

Therefore, the recently published study in Sustainability Journal called LED Light Sources and Their Complex Set-Up for Visually and Biologically Effective Illumination for Ornamental Indoor Plants (https://bit.ly/2QHE24P) might be an interesting read for those who are looking for specific answers on the subject. This research work has been inspired by the need to provide appropriate ornamental plant illumination for the Zurich lnnovation Center Givaudan, Kemptthal – a real life project (https://bit.ly/2JTPZDQ). A master thesis was developed, which translated the vision of the Givaudan project into the academic field (https://bit.ly/2Iip1Cz). This thesis formed a research-based foundation, and its findings instigated further detailed study, as presented in the research paper.

This research shows the complexity that’s involved in designing illumination for people and plants in indoor spaces and attempts to answer the question for an optimal action spectrum for visually and biologically effective LED illumination. Additionally, the authors create sustainable design principles when applying LEDs to provide illumination for ornamental plants indoors.
As listed in Table 1, we can see that there are crucial light-related requirements such as the light spectrum, the intensity of light energy as well as the timing and duration of light, which affect both ornamental plants and humans. Light information about the environment has been both intercepted by plants and humans via different photoreceptors containing certain photosensitive pigments that absorb electromagnetic radiation at a specific wavelength. Green plants react to optical radiation they use for photosynthesis (transforming light energy into chemical energy) as well as photomorphogenesis (for overall development control as well as defining their shape).

The action spectrum for plants, known as the McCree Curve, has been defined between 280-800nm, and the part beyond the visible light spectrum is shown as a continuous black line on the drawing. The Photosythetically Active Radiations (PAR) spectral range, commonly used in horticulture, contains an incomplete range between 400- 700nm for whole plant development, shown as a dashed box on the drawing. Research clearly states, that the photomorphogenesis of various plants require the electromagnetic radiation outside the PAR range from ca. 380-850nm and any exclusion of specific wavelengths such as UV light and far-red will have an impact on other plant processes, which will in consequence, have a negative impact on growth and development. 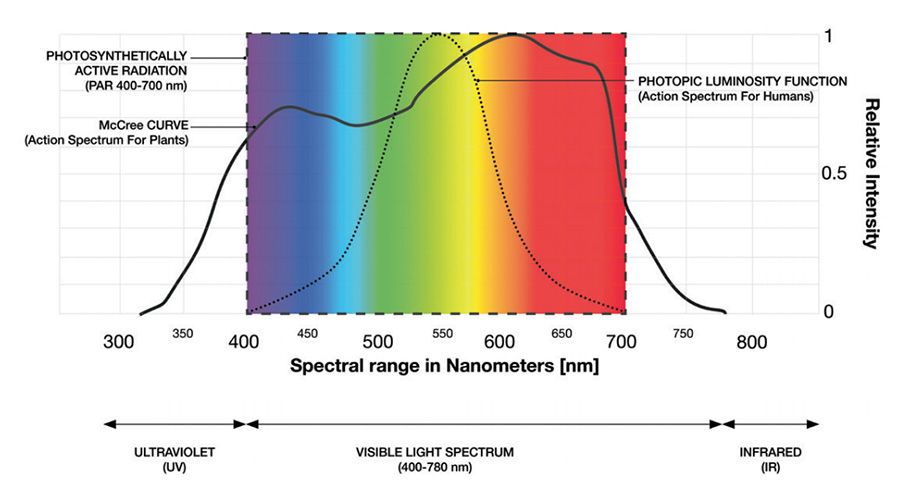 Whereas, the action spectrum for humans is determined by the luminosity function V (λ), shown as a dotted line on the drawing and a range between 380-760nm. So we not only have different light related requirements between plants and humans, but also there is an issue of standard measuring devices that only include visible light ranges based on CIE recommended spectral luminous efficiency functions. Lastly, standard LEDs as non-thermal light sources do not produce advantageous thermal IR wavelengths of light, which is beneficial for plants as well as humans.