The new business center class A is in the 1st Zemelniy lane, not far from the «Ulitsa 1905 Goda» underground station, near Krasnopresnenskaya embankment and the business district Moscow City.
The business center project was developed by the UNK Project architectural bureau. A distinctive feature and recognizable element of the architectural appearance of the building is the openwork, grid-like shell on the facade with green plants. This principle is widely used in the progressive architecture of the 21st century and it also refers to the model of Soviet constructivism, reminding of the tower of engineer Shukhov. Triangular at first sight in cross-section building has no sharp corners. They are rounded and closed with a mesh structure that softens the appearance of the building. 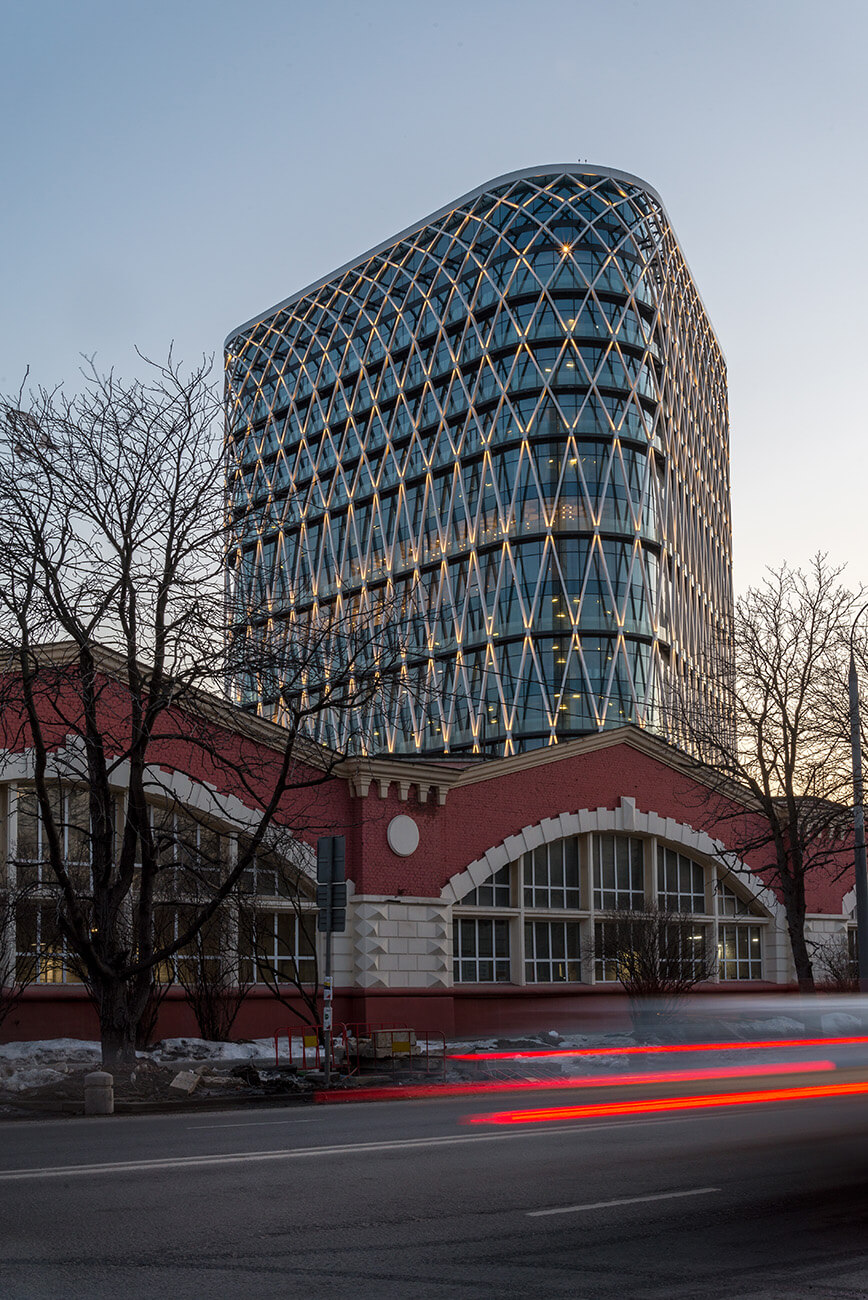 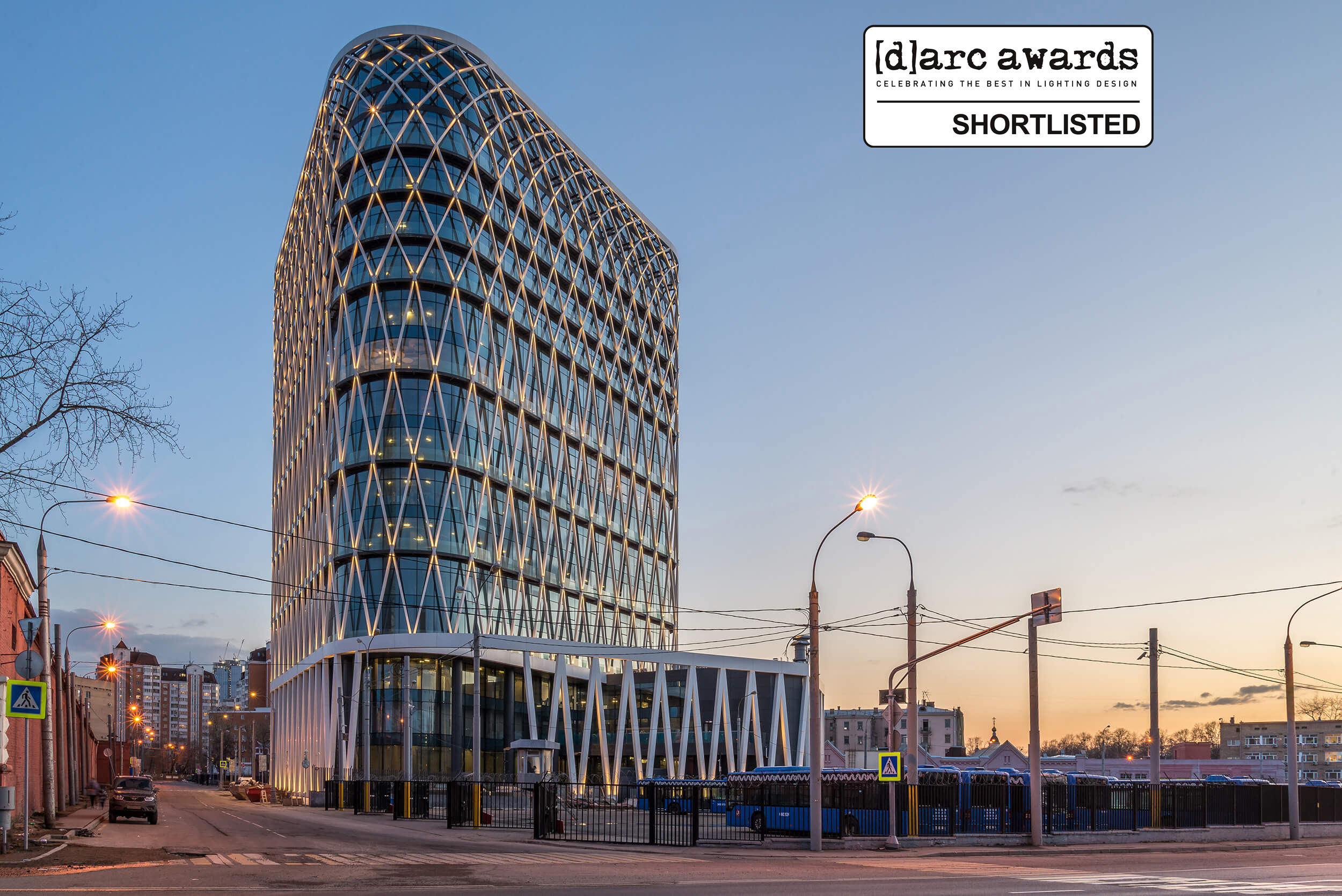 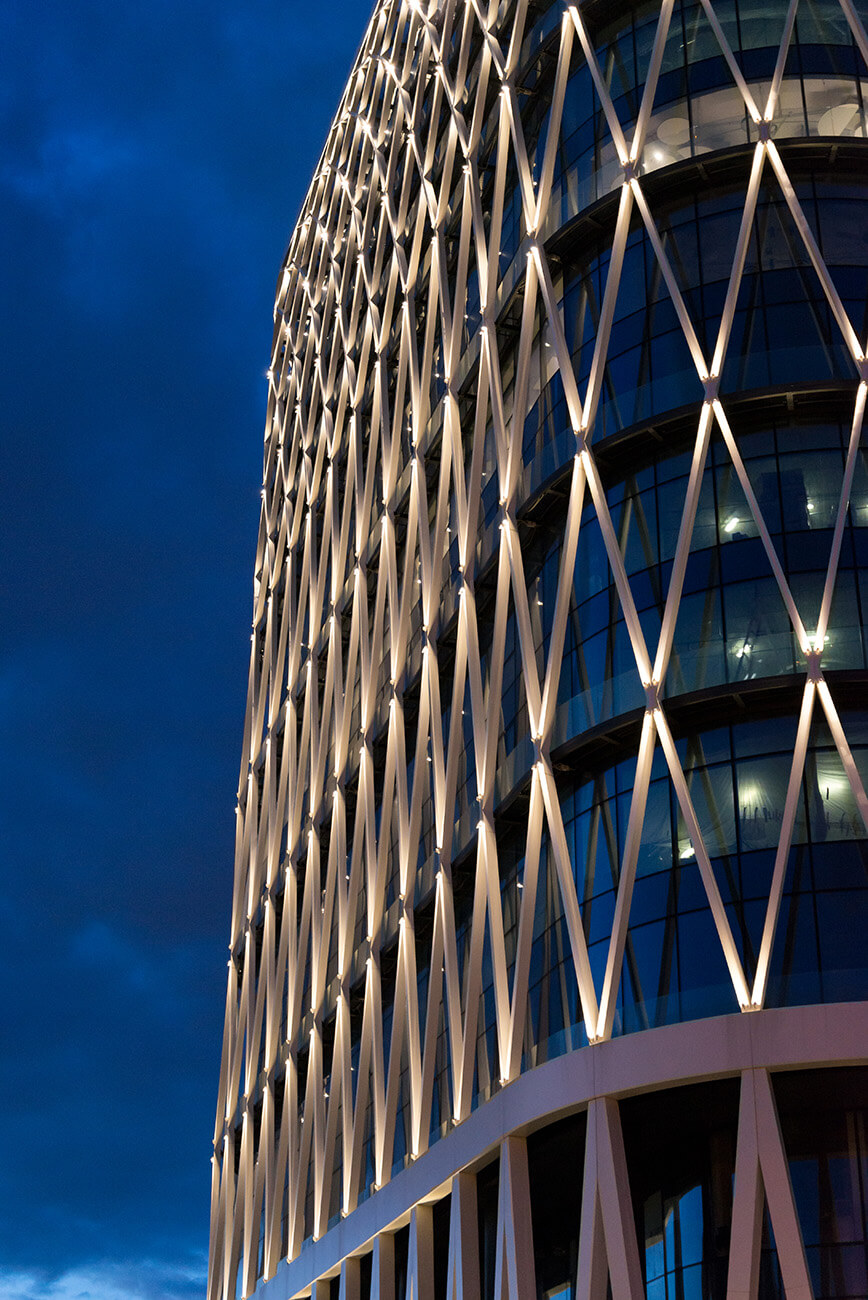 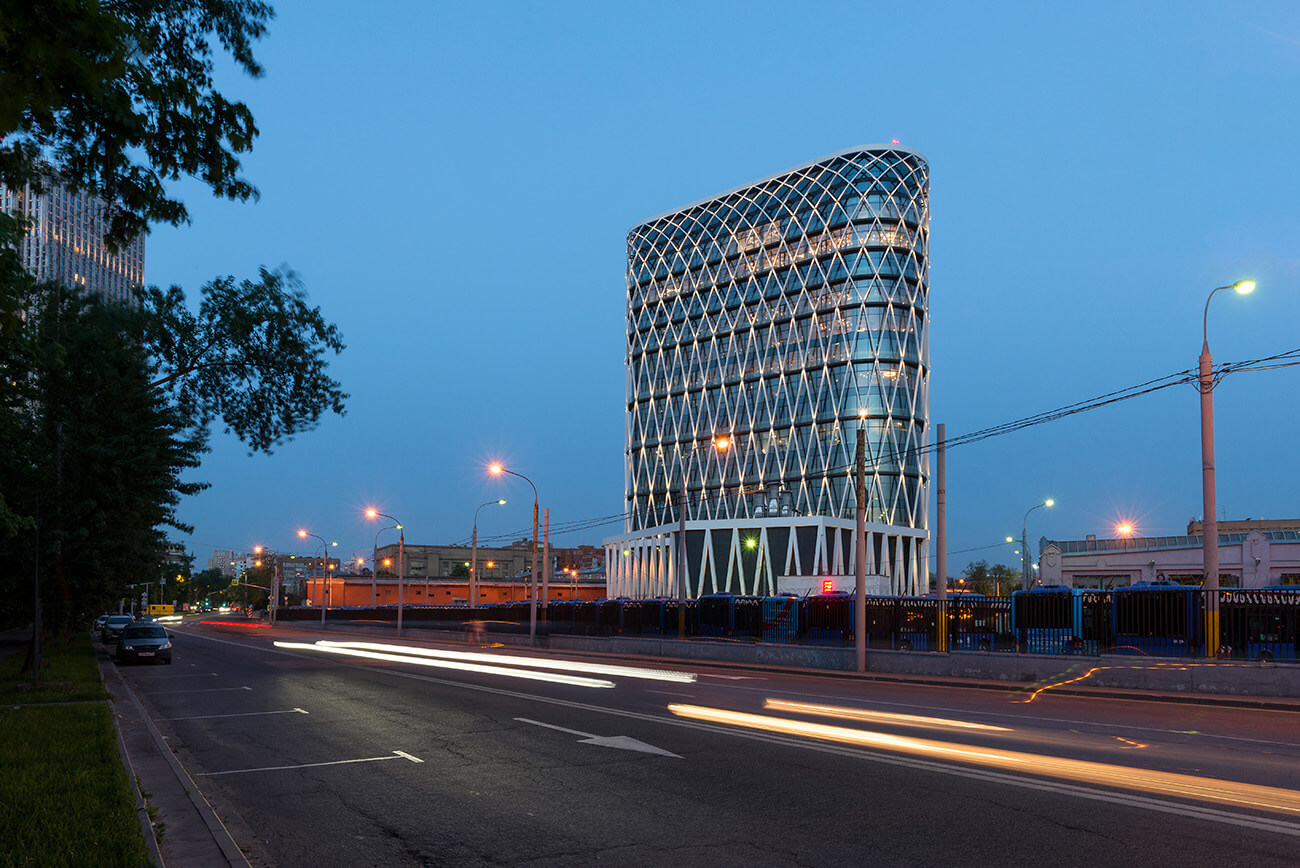 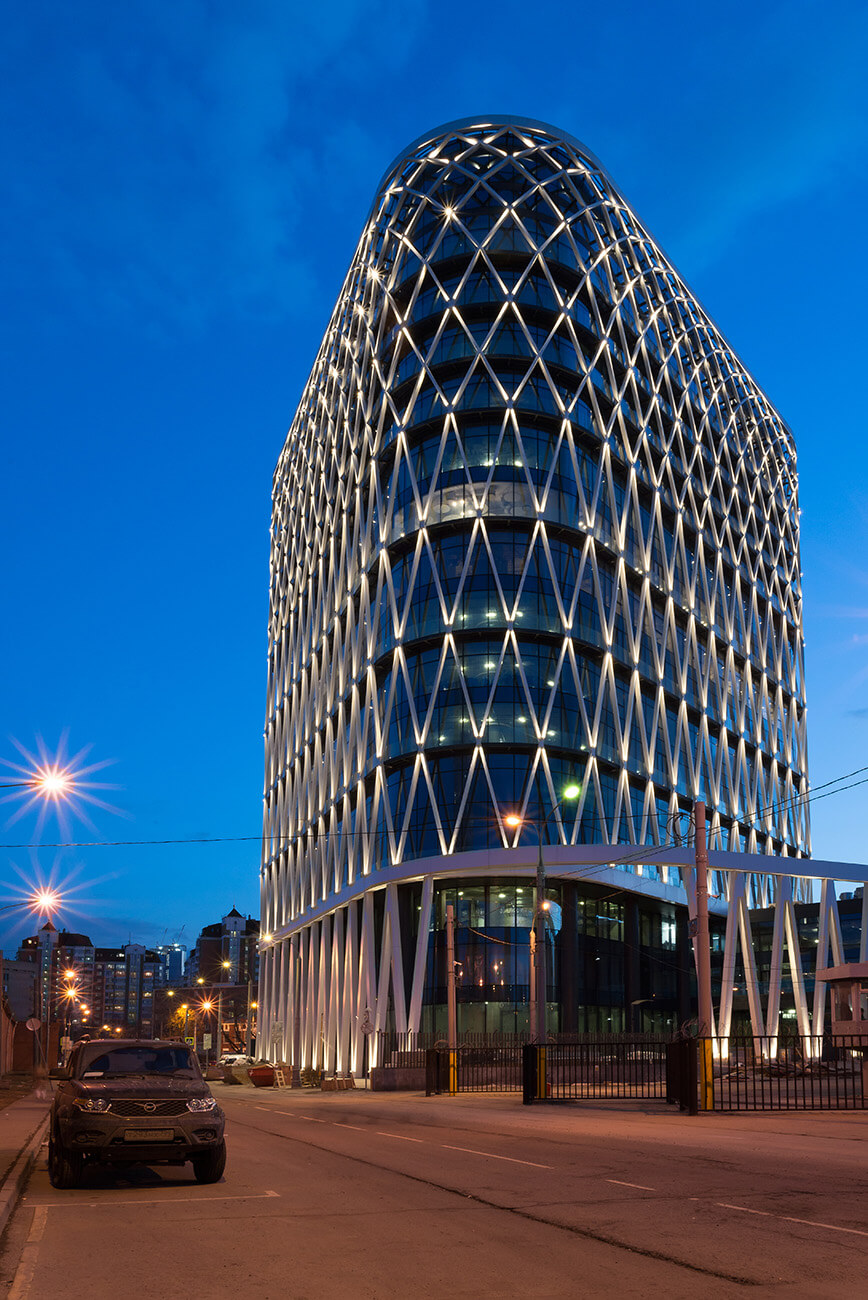 1 / 4
Lighting
An openwork metal frame creates an integral and recognizable appearance of the building at the daytime. It was necessary to emphasize this characteristic structural element with the help of light during darkness.
It became possible to solve this task using LED projectors with narrow beam angle optics. There were used color temperature 3000K there. The lighting fixtures are placed on the crosshairs of a metal structure and shine from top to bottom and bottom to top. Narrow optics helps to avoid flare of side surfaces. The light beam outlines each section of the metal mesh. In the evening, when the lighting is turned on, the openwork frame is readable even against the background of the glazing of the building's facade, through which the light of the interiors is visible.
The basement floor and the entrance area continue the holistic image of the grid. The canopy above the basement is supported by inclined columns placed in accordance with the general design pattern. To illuminate the columns were chosen minimalistic lighting equipment with narrow optics and appropriate color temperature.
Thus, in the evening the whole building looks like a single ensemble from the basement to the highest point, emphasized by lighting. The effect of light pollution is minimized because the luminous flux of the luminaires is aimed directly at the construction’s frame (along it) and there was used extremely narrow light beam. Light does not interfere with the pedestrians and people inside the building.

AWARDS
The project was included in the shortlist of nominees for the international Dark Awards 2021 in the category BEST EXTERIOR LIGHTING SCHEME - STRUCTURES (HIGH BUDGET).

BC Zemelny was shortlisted for The International Architecture Awards 2022.
1 / 4
Similar projects
BC AFI2B Class A+

A historic building in the heart of the Russian capital, an example of the beauty and grace of architecture